“Sorry, something’s come up - someone else will have to take my place.”

Just like that, my co-driver pulled out - and Thunderwood’s entry into Pistonhead’s inaugural Sporting Tour was thrown into jeopardy, right on the eve of the event.

With everyone else newly wedded, freshly babied, committed to their jobs, taking their Labradors to school, children to the vets, and busy with all that stale and uninspiring responsible adult stuff, I couldn’t draft in another Thunderwooder at such notice.

However, I had one last hope. An outsider.

But before we get on to that, the context. The Pistonheads Sporting Tour is arguably one of purest expressions of driving joy, a Motorsport UK-approved event that sees more than 100 of the most hardcore members of one of the most iconic and notorious enthusiasts clubs, each driving some of the country’s most fascinating and desirable cars, trek their way through over 100 weaving miles of beautiful British countryside.

Each brings a co-driver to help navigate an intentionally-complex route, equipped with nothing but a cryptic ‘Tulip’ book of navigation clues, stopping for an autotest and lunch along the way.

No GPS, no apps, no pesky commuters – just drivers, their companions, their machines, and the open road. Nirvana. At least, that’s how the theory goes.

Meet my substitute co-driver, honourably stepping forward at the last minute – friend of the team, Simone. Now, Simone didn’t know about cars, didn’t know the area, and had never seen a Tulip book in his life. He was very much, then, so much of a plan B that in any other instance he’d have been a plan F. But he was fiercely keen and eager to learn – and, crucially, paid no heed to boring, responsible, adult things.

Unqualified, irresponsible and overkeen? Clearly Thunderwood material. So off to Suffolk we went.

Strange to the sublime

Assembled the following morning at the meeting point at a Holiday Inn outside Ipswich, the hotel car park was transformed into a makeshift race day paddock, buzzing with anticipation and overflowing with automotive delights ready for a day of action. They ranged from the strange to the sublime – from classic Jaguar E-Types to the latest McLarens, via hot hatches, supersaloons (Lotus Carlton, anyone?), trackday specials, and even one plucky Toyota Prius – all united by their immaculate presentation and overall class. 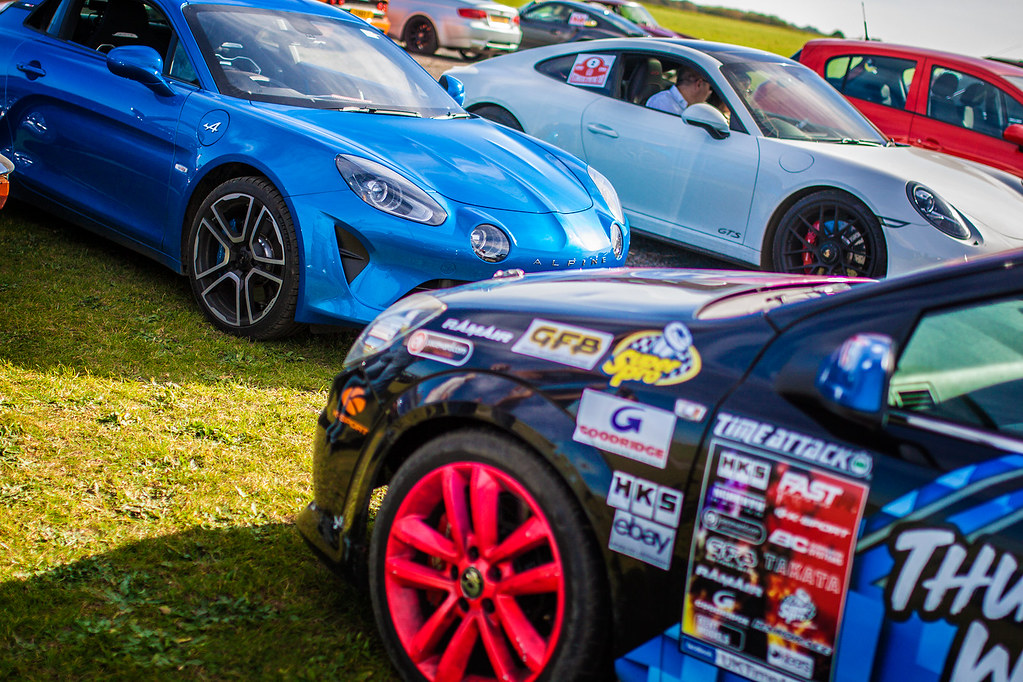 Contrast that to… Our Disastra. Oh yes. There were many cars we could have brought instead, and literally all of them would have been more appropriate and relevant for a road rally than a circuit car with rock-hard suspension sitting one inch from the ground. And that was exactly the point – when have we ever done “appropriate”? Paired with our matching team kits, we embodied the noble concept of “all the gear, no idea”.

Formalities and briefings aside, teas consumed, and co-drivers armed with their Tulip books, off we all scattered across the British countryside in our colourful and loud machines, like a bag of Skittles bursting over a map.

At the half way point and many shenanigans later, we trickled into Parham Airfield Museum, complete with - you guessed it - an airfield. This was the lunch break checkpoint.

You see, this was also the venue for the day’s only timed, competitive element - the autotests. These typically involve memorising and performing a complex and tight route around a series of cones as fast as possible - but this case, scaled back to an easier level to accommodate the range of abilities and cars.

Lining up to start, I had a confession to make. I turned to Simone.

Despite this, I also wanted to decimate our fellow competitors and make them rue their very existence.

It’s a tricky balance to strike, but with a team to represent, a dedicated Time Attack car (I mean, it’s built to destroy the stopwatch, the clue’s right there in the name) and a point to prove, I halted the car at the front of the queue, holding everyone else up, to speak to the marshal to clarify the details of the route so we had the insider knowledge and best fighting chance.

Out came the race driver talk; the assertive body language, the furrowed brow, the hand gestures tracing out the perfect line. This meant business; I was in the zone. After clarifying the correct route through the cones – not one, not two, but three times – I buckled back in, paying no heed to the angry honks from the queue behind. We were ready; it was show time.

You see - I have a very special gift. A gift handed down, some say, by the gods themselves. And that gift is…

Being not very gifted at all.

At the second cone, I took the wrong turn, and our hopes were dashed.

With the memory and navigation skills of a teapot, unless I’m driving on a purpose-built loop of tarmac with only one possible route clearly demarcated by red and white kerbs, I’ve got no chance. And that was that - anticlimactic and straight to the bottom of the timesheets.

As I said, I hate autotests.

After a sausage sarnie of shame, we hit the road again.

What followed was more mischief and chaos – dozens of loud and colourful machines joyfully blasting through the countryside, individually and in groups, getting lost, forming friendships and revelling in sheer automotive happiness. It was total silliness – and I was in love.

Neatly bookending the day, the finish checkpoint was the Holiday Inn, our starting point. Convenient on one hand, but also symbolic on the other. Back where we started, we were again bubbling with anticipation, this time for the next event – confident as ever and unmoved from our initial belief that nothing brings people together or ignites joy like the simple pleasure of adventures in cars. 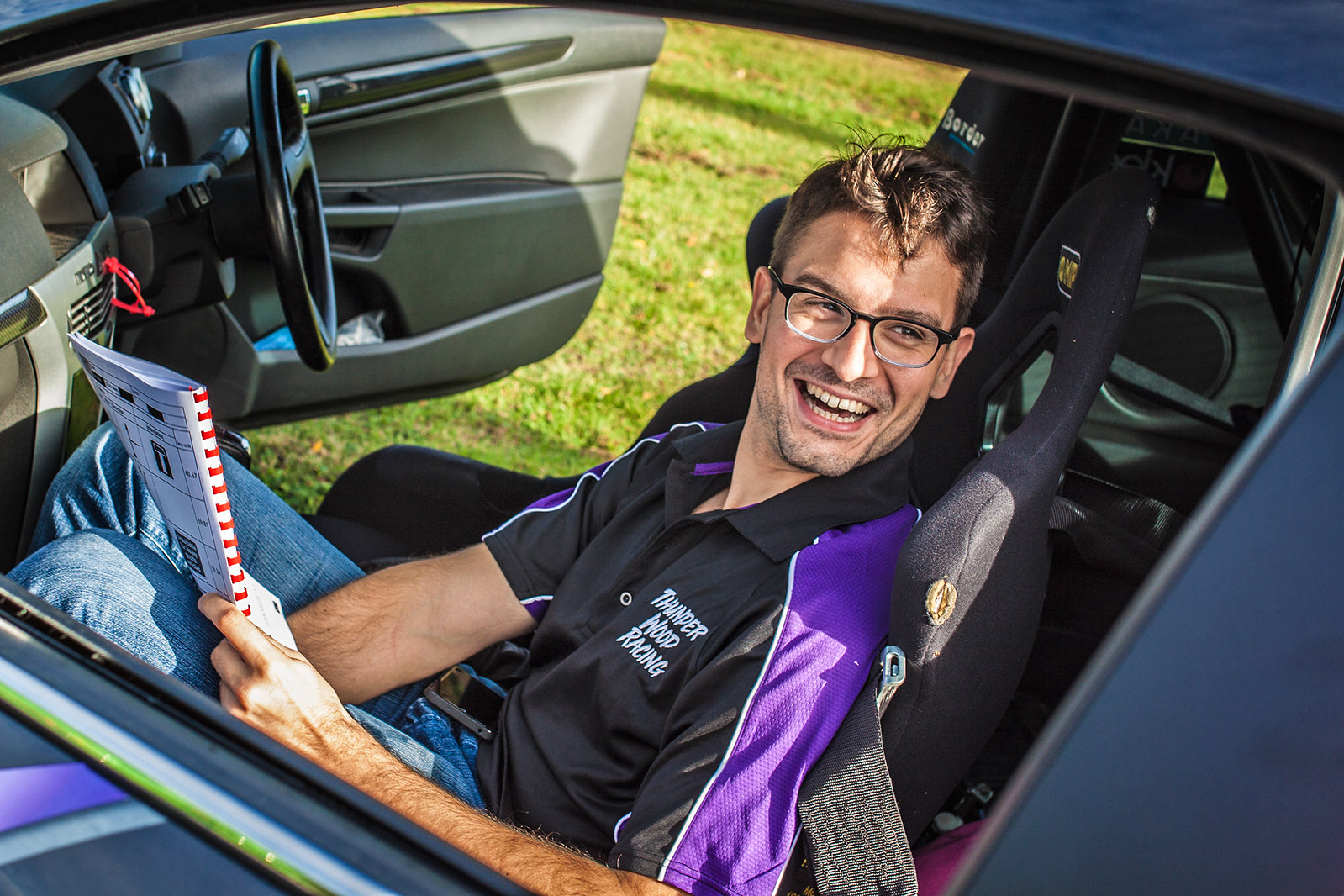