A last-minute breakdown sees Max drive a modified Toyota MR2, of all things, at Drift Matsuri - and everything he thought he knew about drifting is turned on its head.

Picture the scene: a dark October night. Drizzle outside. My E39 drift build had stalled, and I needed inspiration.

As if the drift gods themselves had heard my prayers, my phone pinged. Max, equipped with his 2JZ-swapped S14, was heading to Drift Matsuri at Anglesey. Did I want to come and take photos?

Fast forward to cups of tea, many weeks later, as we reflect on an eventful weekend.

First things first - the morning’s drivers’ briefing, hosted by the BDC’s Mark Buckle, better known as ‘Sweeps’. “Last thing”, he concluded. “Keep both hands inside the car. None of this bollocks of out the window, yeah?”, he clarified to the packed room, doing a ‘hang loose’ gesture.

Formalities out the way and all hands kept firmly inside the vehicle, we headed out on track. Immediately, disaster strikes - Max's S14 stubbornly kept overheating, just a few corners into Angelsey’s twisty ‘touge’ layout. After a few attempted runs, we gave up.

But here’s the kicker - the S14 was running a Mercedes fan. Why?

“The S14 ECU, by default, simply sends a pulse out - to turn the fan on, or to turn it off. I wanted it to run at variable speeds, which the ECU can’t really do”, Max explains over his steaming mug. “The Mercedes fan we decided to use - it’s very low profile - has a speed controller built in. We’ve had it on the car since day one.” 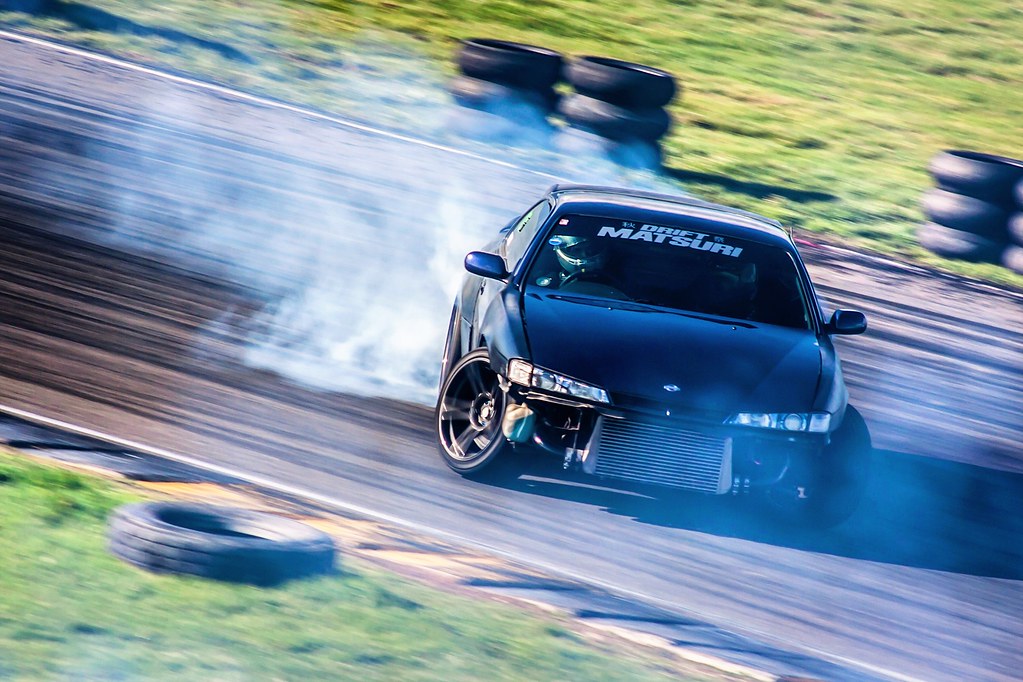 The Mercedes fan originally cooling the S14 was an inspired upgrade, but it was a junkyard part that had now reached the end of its lifespan - just as we hit the track. Fortunately, a Mercedes E Class of a similar generation had convoyed up with us - and we looked at it across the garage with hungry, cannibalistic eyes.

“Had we not brought the Mercedes, the weekend would have been over within an hour of getting to the track! It wasn’t even meant to come with us. But we just had so much stuff between us that taking the truck wasn’t enough. So we thought - ‘screw it!’

“With a bit of massaging, the fan from the E Class fit into the S14 - but obviously, it wasn’t designed to! So we had to trim off a few bits, but at least the connector was the same. Between the team, we got it working. We wanted to see the S14 in action - we’ve run free with the build so far and it usually runs flawlessly - this was the only hiccup! Of all things, it was the fancy Mercedes-Benz part that let us down!

“So we nicked the fan and controller from the E Class, whacked them in, and we had no problem whatsoever afterwards. The S14 ran perfectly. Flawlessly.”

While this repair was ongoing, mostly at the expert hands of our friends at Nispro, their oddball, skid-spec SW20 Toyota MR2 Turbo sat alone and unloved, in the pit garage corner, its owner up to his elbows in Mercedes bits.

That was, until Max was offered to drive it while the S14 was out of action.

“At first I was like, ‘Are you sure?’ I don’t drive other peoples’ cars. That’s on purpose! I know what my own car is likely to do on track. No surprises. And if it breaks, its my car and my money!

“Plus, if I bin it - that’s both my own weekend ruined, and his! This isn’t a gentle drive to the shops, it’s quite a specific style of driving!

“But you know what… I’ll give it a go! Although I’ve raced quite a few mid-engined cars, I’ve never drifted one. Nor does anyone, really - it was the only one at the circuit all weekend. But I’ll play it safe, stay away from people, take a safe line, and keep away from the edges of the track."

With Nispro’s Laura in the passenger seat to provide some pointers, they headed to the ‘hairpin’ layout first - just to try to get one corner right in this midship mystery, forget linking a series of them! Anglesey’s hairpin layout does what it says on the tin - a straight to build up some speed, then a wide hairpin, and then an exit straight.

“I was told it didn’t have much power, the gearbox is crunchy, it’s tricky, it’s snappy, it’s twitchy… But while I took that on board, there’s plenty of run-off here, and we wouldn’t be initiating that fast as the straight’s not long enough… So I just launched it.

“The next thing I know is that this little car - the most unconventional drift car out there - ended up teaching me more things than I’ve learnt in years of drifting my own more traditional car! 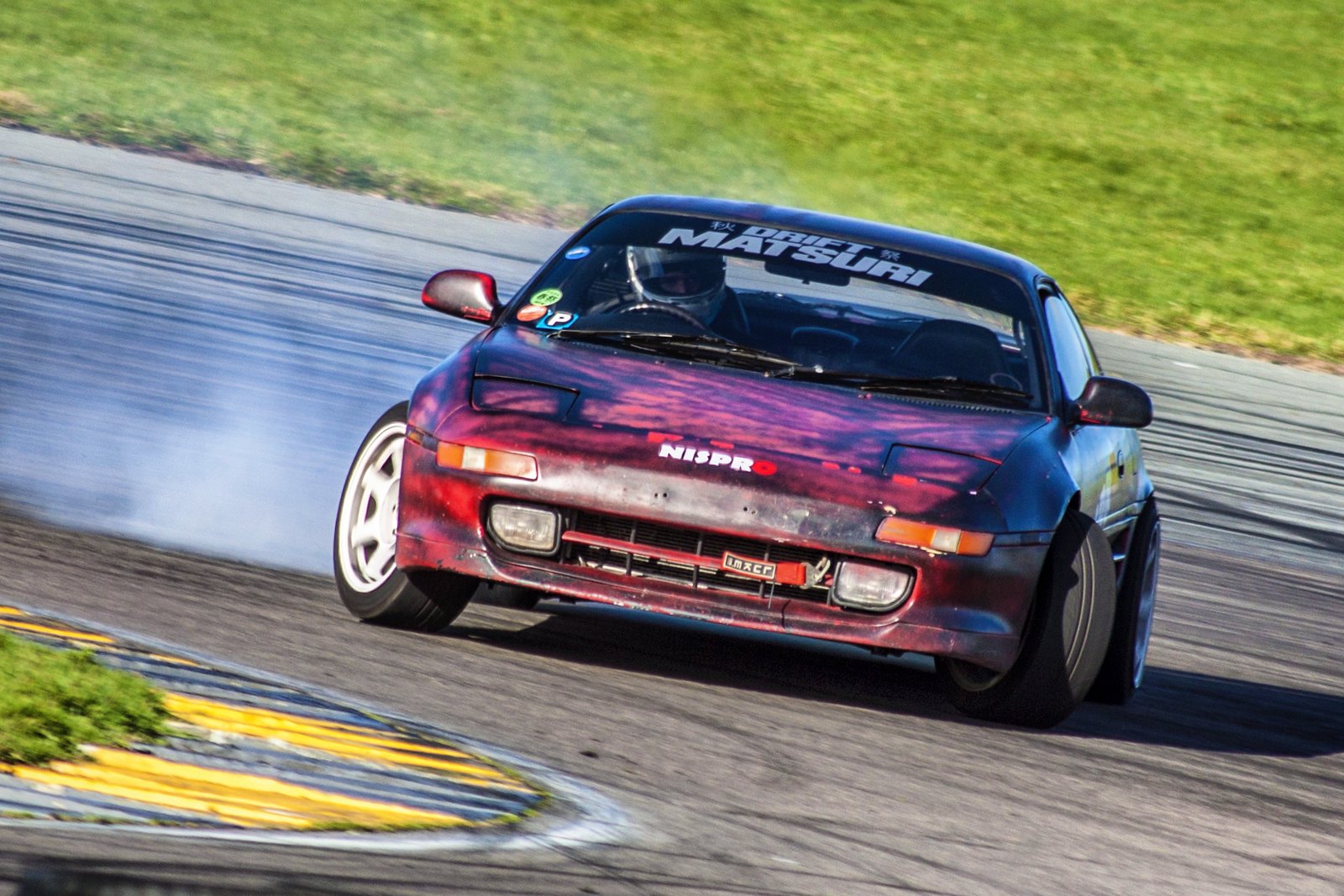 “The balance in the MR2 is very different - my S14 is nose-heavy in comparison and set up for strong front end grip. Whereas the faster you go in the MR2, the lighter the nose gets.

“So you need to be even more assertive with your inputs to keep it drifting. You need a lot more commitment. That controlled aggression didn’t exist in me until that point.

“Later, on the touge layout, I was linking corners better than ever before in the S14 - the MR2 took some hesitation of out me, simply through necessity. I found the MR2 needed that little bit more of commitment to keep it sideways, and changing direction took a little more effort. You have to play with the weight balance so much more. For example, because the weight would shift backwards when you accelerated, you couldn’t even left-foot brake to trim your line. With all the weight over the back, you’ll just lock the front wheels and head straight.

“The S14 is a lot more traditional, and you don’t strictly need to be mindful of all this stuff - it kind of does it for you. I don’t have to fight physics as much. I hadn’t appreciated that before.”

Back in the pits, we finally got the new radiator hooked up - and the S14 was now ready to attack. It was time to properly shake down its latest setup changes in the run-up to Anglesey - new suspension components and a new map with loads more torque - with the fresh MR2 revelations in mind.

“Once I got my head around the MR2’s snappy change of direction, transitioning with the S14’s longer wheelbase now gave me that fraction of a second longer to think about my next move, which I hadn’t earlier appreciated.

“Previous visits had me thinking, ‘God, how do I do this?’ for certain sequences of corners - and just a handful of laps in the MR2 changed that completely.

“Jumping back into the S14 after drifting such a totally unconventional layout and setup of car made me appreciate its capabilities a lot more. It wasn’t my car holding me back - it was me, all along! On my first run of the national layout, I linked turns 1 and 2 - without even thinking - while most people tend to manji in between. I was letting the car run to the extremities of the track much more comfortably and confidently, without worrying about going off. I now knew I could pull it back in. No more overthinking, lots more faith in the car. The MR2 helped me commit a lot more and hesitate a lot less. That’s the biggest change for me.

“It’s crazy how such a positive breakthrough came from a weekend that looked like, after such meticulous planning, it would turn into an absolute nightmare.

“We got there late, soaked, couldn’t access our accommodation, got no sleep, broken down car… And the little MR2 turned it into the best weekend ever!”

Later, having finished my tea, and heading back home, I think about Max's enthusiasm, the plucky little Toyota and the stubborn 'can-do' attitude so prevalent in drifting circles. Inspired by Max’s ‘eureka’ breakthrough, I now head into the long, dark winter more optimistic than ever. 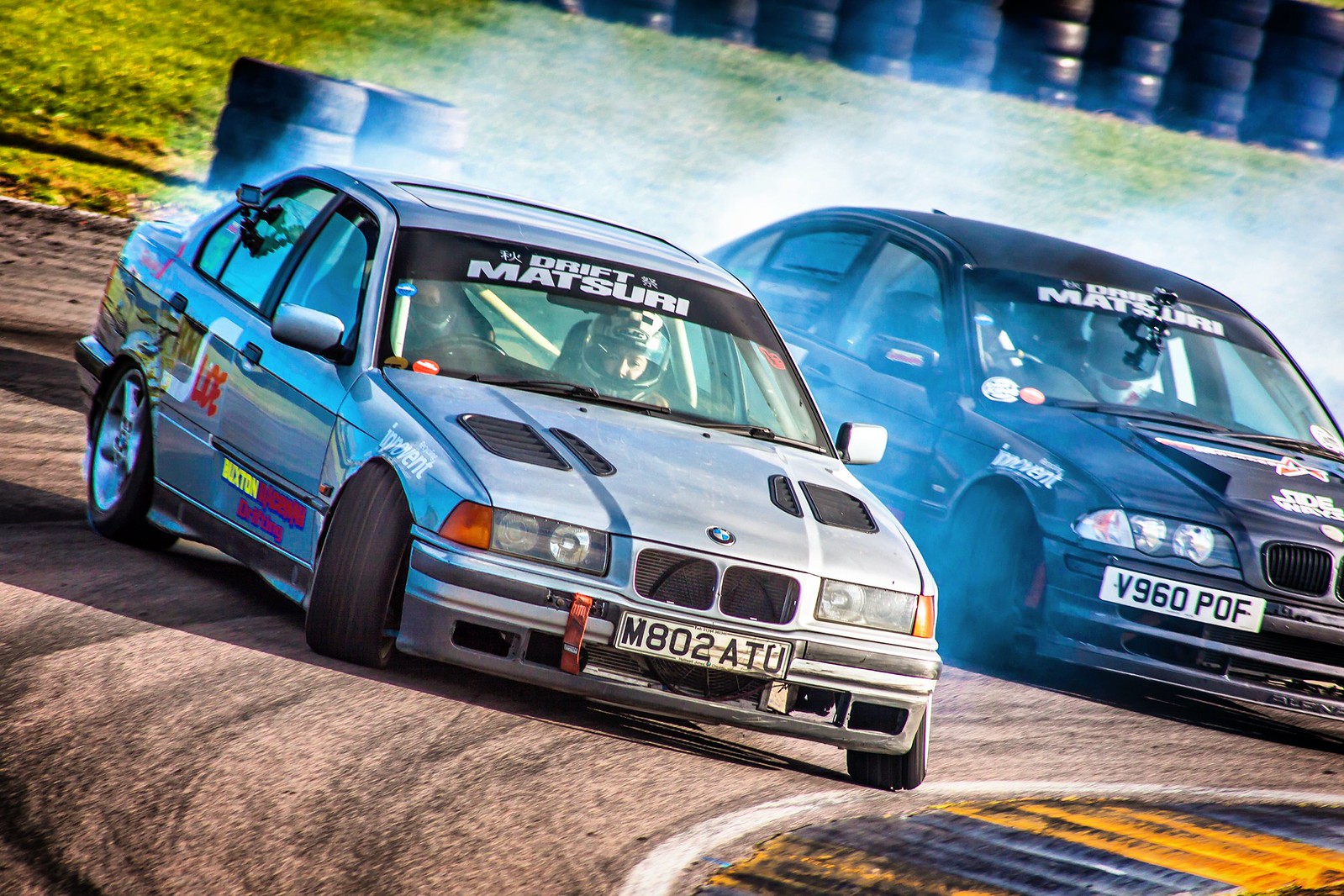